This week the Australian Fair Work Commission has ruled that unfriending someone on Facebook is a form of workplace bullying. Why would you unfriend someone and what other options are there? 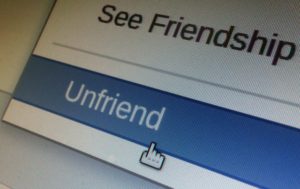 This week the Australian Fair Work Commission has ruled that unfriending someone on Facebook is a form of workplace bullying.

The unfriending on Facebook action is part of a wider bullying claim in a case involving a Tasmanian Real Estate agent. According to the link above.

The Facebook incident took place in January this year, after Ms Bird allegedly called Ms Roberts a “naughty little schoolgirl running to the teacher” during an aggressive meeting in the tea room.

Ms Roberts told the commission she left the office crying and when she later checked Facebook to see if Ms Bird has commented on Facebook about the incident, she found that Ms Bird had deleted her as a Facebook friend.

Fair Work Commission deputy president Nicole Wells said in her decision that the unfriending was unreasonable behaviour and that Ms Roberts had been bullied at work.

As Facebook becomes increasingly more involved in the workplace, we can expect more incidents as the above.

Why would you unfriend someone?

We’ve all been there. We’ve all wondered if it’s worth it, or why we are even bothering.

I personally unfriend people if they are factoring into my thinking in a negative way, often. It is the simplest way in putting an action to communicate or reconnect with them again.

If things get a bit heated in a Facebook Group, and you’re not thinking right with all the emotions, it can be a good idea to distance yourself from the person online. By unfriending it puts considerable communication distance between you, making it harder to connect again. Brash, but sometimes needed.

We all have our boundaries, if it crosses a line for you or if the constant drama, unfriend.

Sometimes (usually on their birthday) someone appears that you have no idea who they are or what the connection is. This isn’t a numbers game, it’s a value game. Unfriend.

Why wouldn’t you unfriend someone?

Unfortunately sometimes a family member brings you to the unfriending zone, however, you also have to sit across the table from them at Christmas over Turkey.

There may be a lot of ambiguous attention seeking status updates, however maybe the best option is reach out and ask what the problem is.

Ignorance is bliss – The unfollow option

At the end of the day, sometimes the easiest option is the unfollow. That way, you’ll remain friends but will not see their posts.

Your Facebook feed should be an enjoyable place, a place you want to return to get valuable information and be entertained. Keep it that way.